Tiphaine Kazi-Tani will take part to the ultimate session of the annual Strate Reserch seminar, at Strate School of Design.
Backing up on some seminal thoughts by W. Benjamin, A. Mendini, A. Branzi and J. Derrida, her talk, entitled “De quel côté être ? Du design, de l’expérience, du design d’expérience“, will question experience turned to a profitable incentive within a capitalistic framework.

Industrial relationships: Chair on Theory and Models of Conception

The Codesign Lab leads a research theme of the Chair “Theory and Models of Innovative Conception”, founded by Ecole des Mines. The TMCI chair is supported by 11 industrial partners.
http://cgs-mines-paristech.fr/tmci/

We focus on “strange objects”. The hype on internet of things, new robot-like objects, teleactivities and hybrid approaches between artistic and technical creations are particularly fertile domains to make sense of emerging regimes of creation and reception. This theme explores the constitution of new identities of objects in society and the generation of new paradigms of design and conception that arise from critical discourses about these innovations. More generally, this theme investigates foundational research questions about languages of description and creation.

This activity goes from field work to understand design practices to analyses of portefolios of artefacts that defy traditional categories. We help develop tools and methods to weave inventions into innovations.

If you want to do research with us, contact: annie.gentes@telecom-paristech.fr

Our two days colloquium begins tomorrow!
For those who wish to hear the presentations but can not come, here are the livestreams: 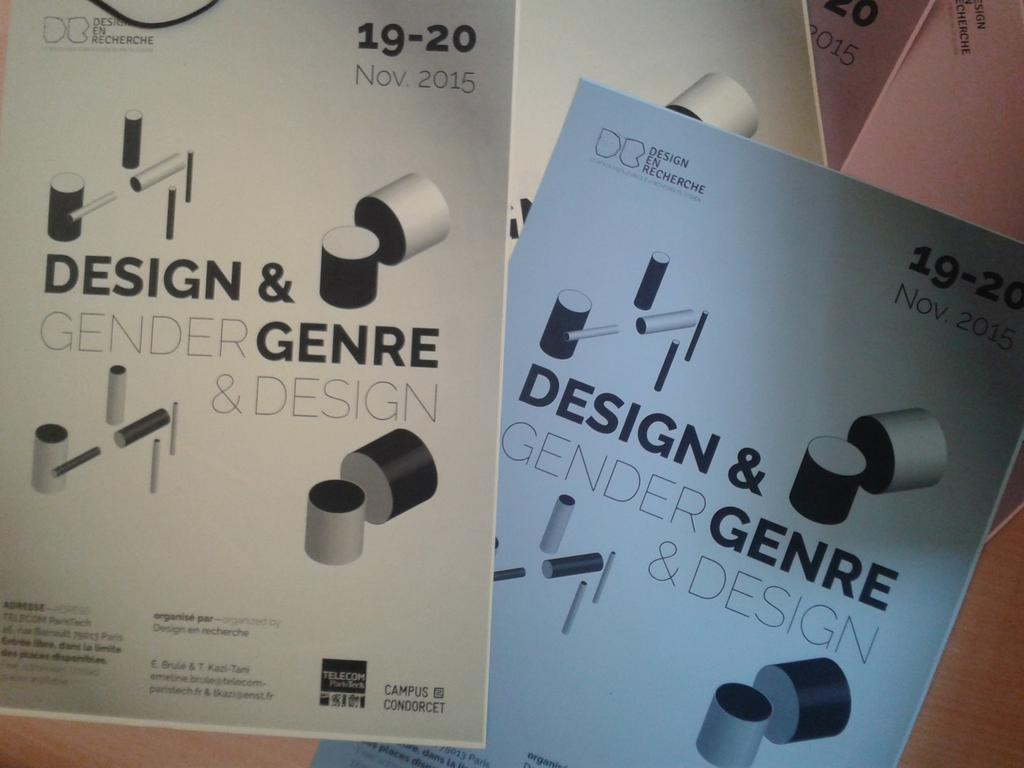 Design & Gender is a 2-days colloquium, organised by Design en Recherche, as part of a serie of events funded by Campus Condorcet, inviting design researchers and practitioners to discuss various thematics, such as “the project”, teaching graphic design or research methods.

END_OF_DOCUMENT_TOKEN_TO_BE_REPLACED

30 juin 2015 · No Comments
Emeline will be doing  a presentation on design and research at INRIA, Bordeaux, on the 8th of July, 10h30, answering the invitation of Anke Brock. She will present a serie of examples of how designers do research, research do with designers and the different possibilities Design [+][-][x] Research offer.
Click to read the abstract (in french).

END_OF_DOCUMENT_TOKEN_TO_BE_REPLACED 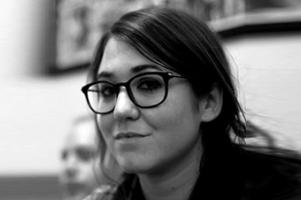 Anne-Lyse Renon is a graphic designer and PhD in Aesthetics and Anthropology from EHESS. Her Doctoral Thesis, realized between 2010 and 2016 at the Centre de Linguistique Anthropologique et Sociolinguistique, Institut Marcel Mauss (UMR 8178),  EHESS-CNRS, under the supervision of Victor Rosenthal is untitled “Design and Aesthetics in the practices of Science.” 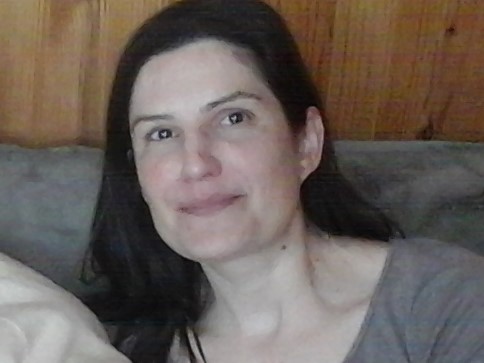 With my nomadic lifestyle, I practice slow full immersion to understand better the complexity of situations and allow more time for discussions and exchanges.
My micro mobile home is also a way to experiment tiny ecological devices and process and can be used to test innovative solutions for alternative ways of dwelling or new materials for building industry.

Misbehaving & Design : A Workshop for the SIG Design Theory

From the 26th to the 27th of January 2015, the annual meeting of the SIG Design Theory was held in Mines ParisTech, Paris.  At this occasion, Annie Gentès and Emeline Brulé organised a workshop about Misbehaving Objects.

The brief was the following: “In societies with high conceptive capacity, objects and techniques have multiple identities. This workshop focuses on misbehaving objects that defy our interpretive skills and social norms. Conceived by artists, scientists, or designers, these misbehaving objects unsettle our expectations in terms of social propriety, sleek aesthetics, or political legitimacy. In this workshop we will explore how these objects challenge design theories and education.”

The concept of Misbehaving was introduced, along with a portfolio of examples. Participants were then asked to map the various concepts concretized by misbehaving objects, and to discuss their production. 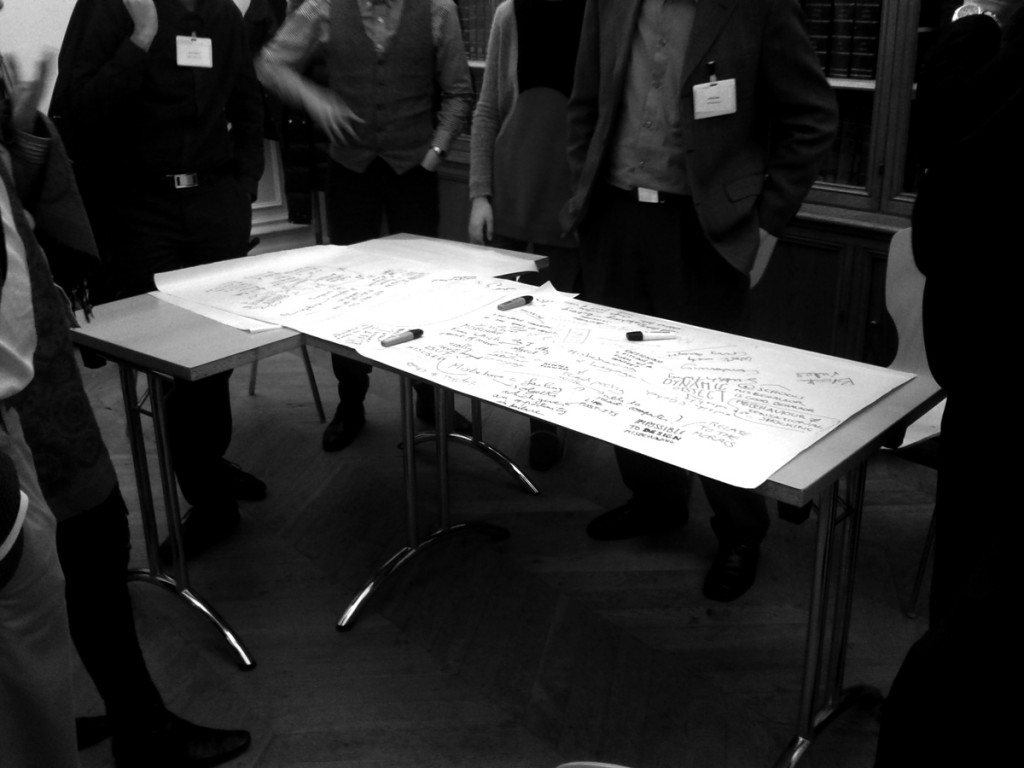 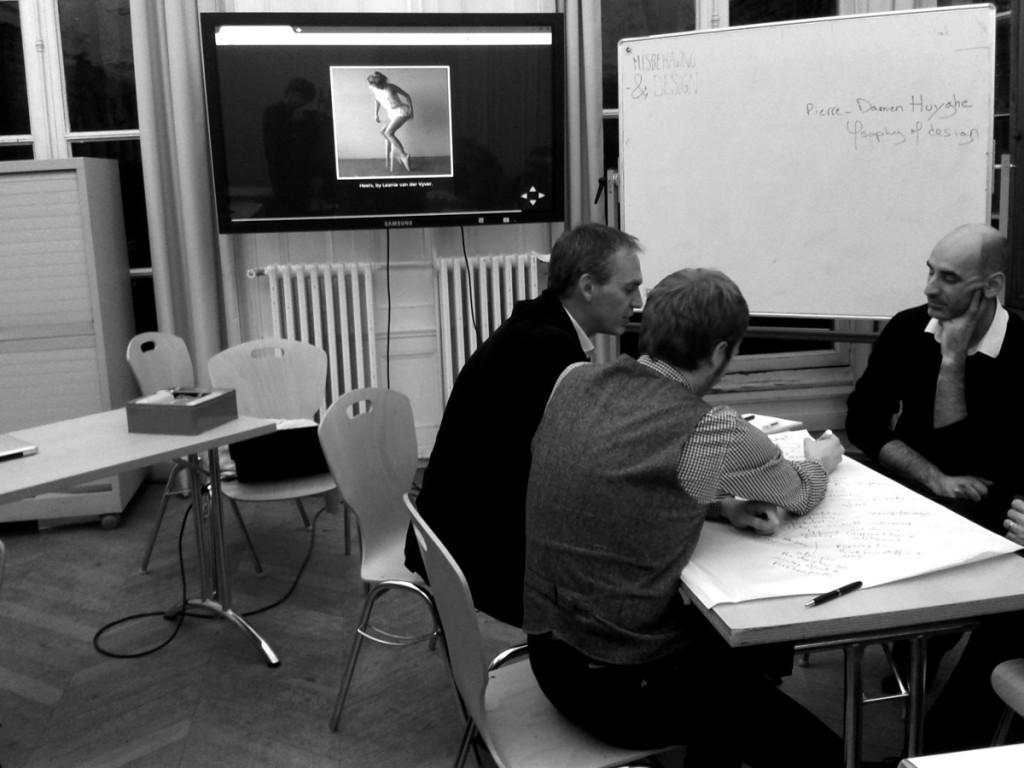 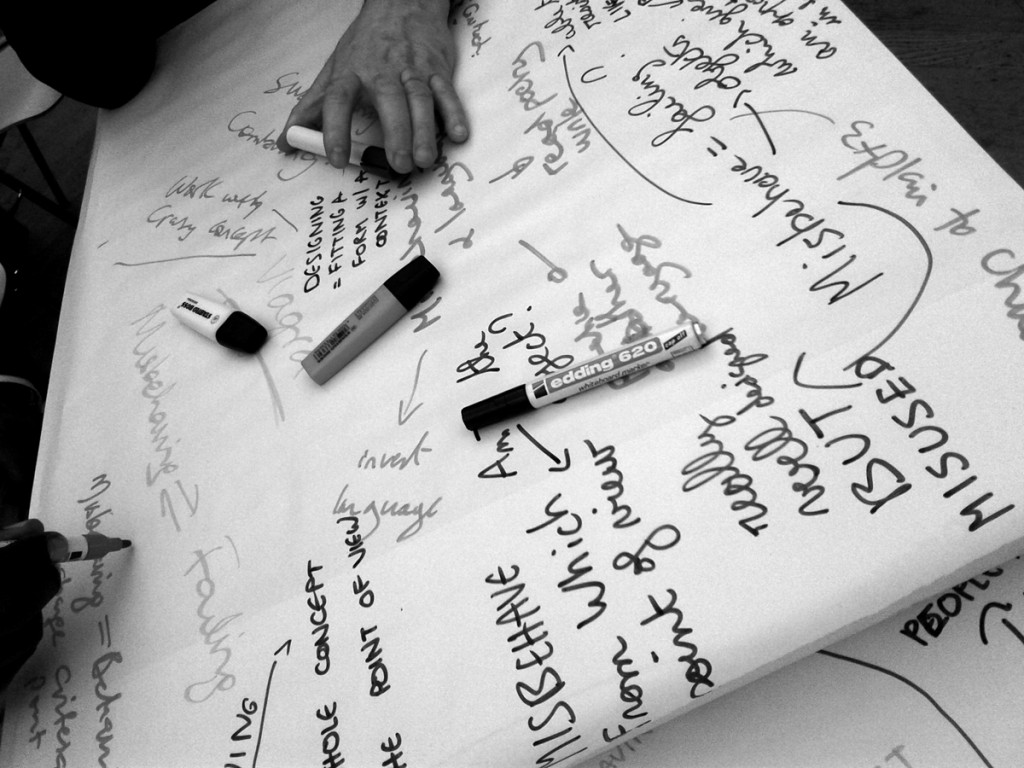 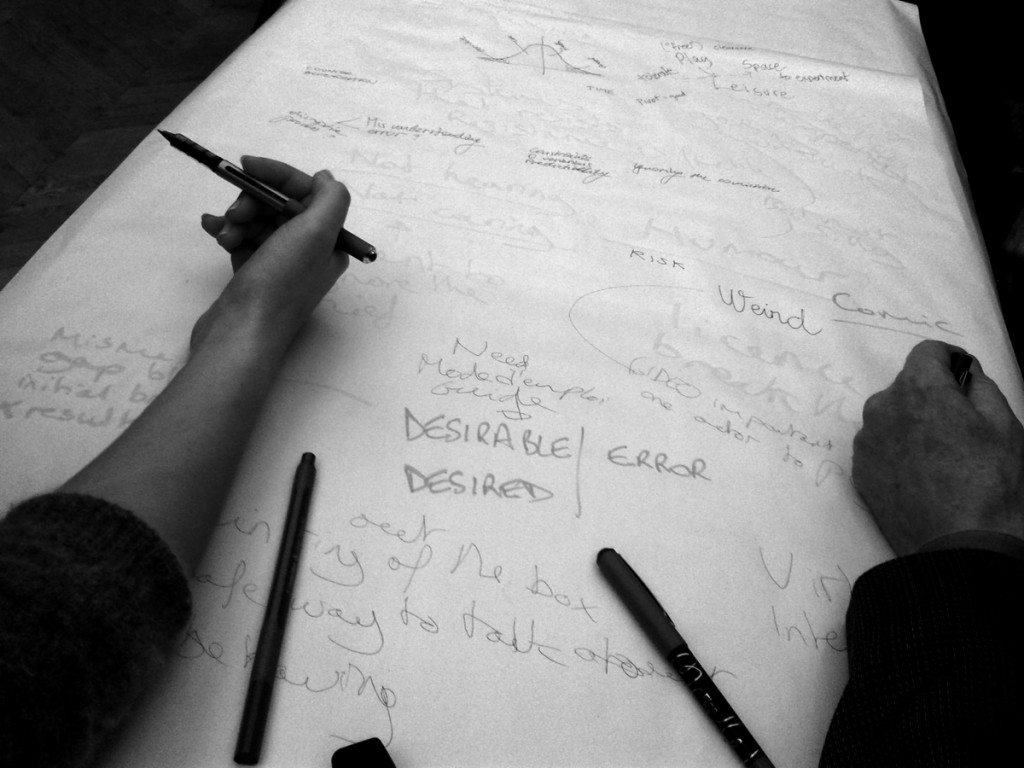 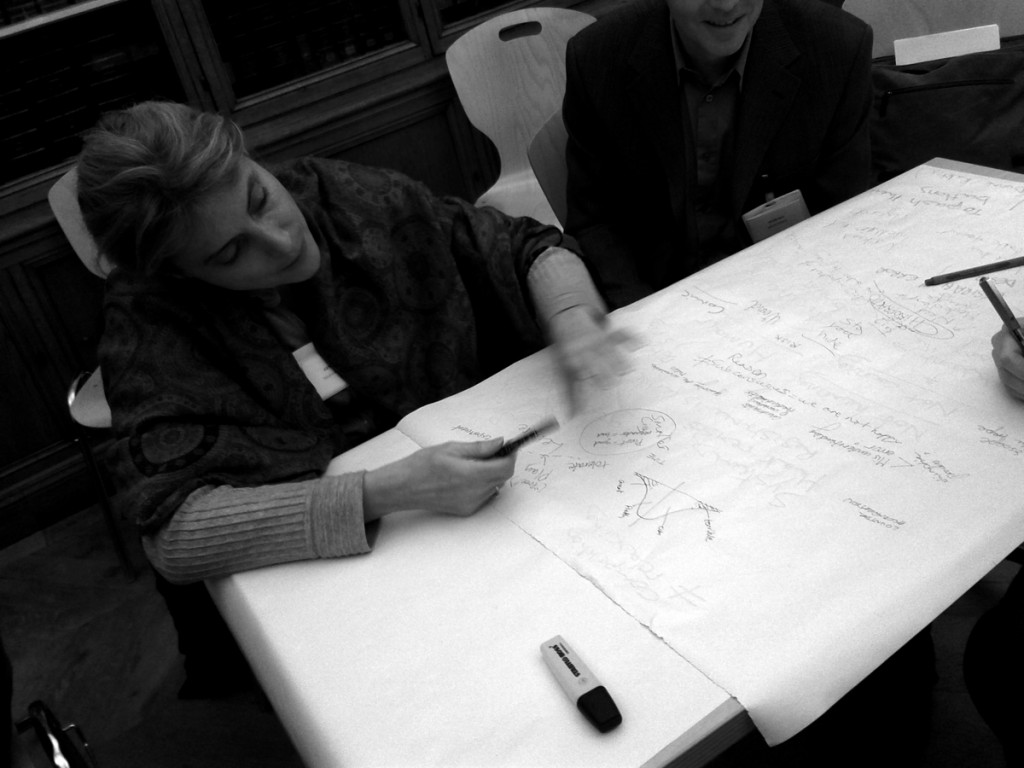 All the identified concepts and ideas were then discussed among the participants, and resumed on this board. 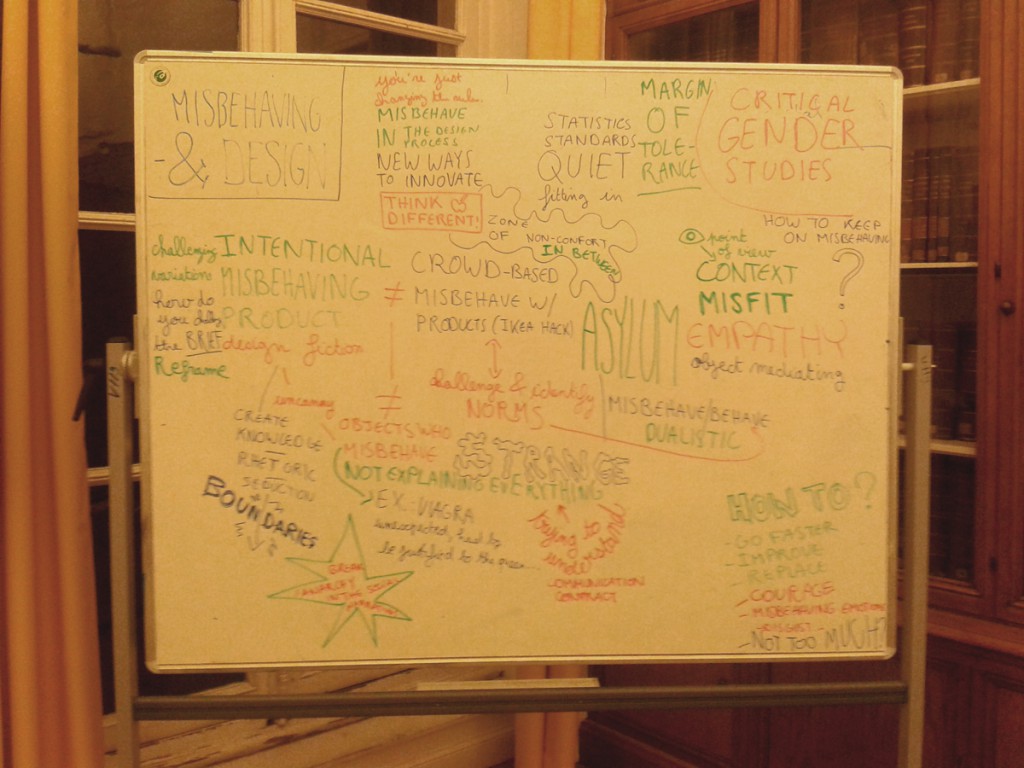 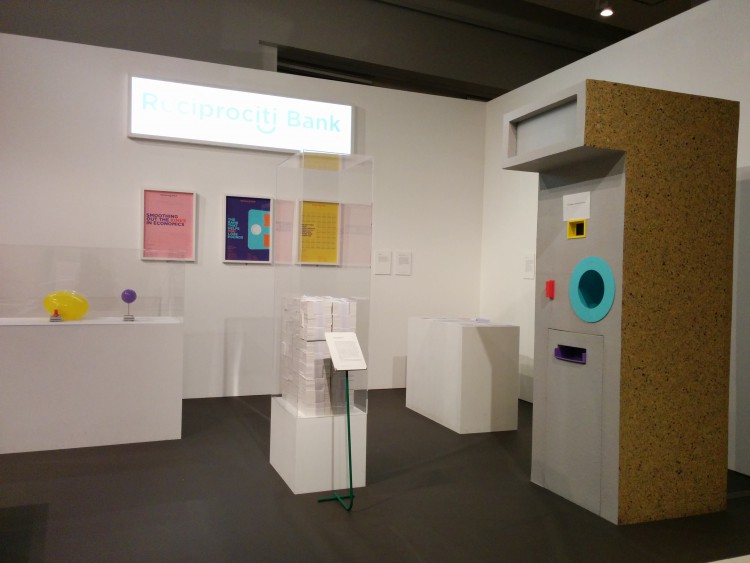 Official Abstract:
“Now in its seventh year, Designers in Residence invites young designers – James Christian, Ilona Gaynor, Torsten Sherwood and Patrick Stevenson-Keating – to respond to a brief set by Deyan Sudjic, the Director of the Design Museum. For 2014, this theme is disruption. “More than most, ‘disruptive’ is a term whose meaning is dependent on the context,” says Deyan. “It’s conventionally considered almost a bad thing — difficult pupils, bad neighbours, ill-considered town planning — it is now the most sought after quality in a new product. The four new works that form the Designers in Residence exhibition all have disruption at their core, yet each designer has taken a markedly different approach.”

Considering the title, here is a question:
If the designer is a virtuoso of norms, what is the place of ambiguity?
We therefore looked at the components of the exhibition and sought elements of ambiguity in the work of James Christian, Ilona Gaynor, Torsten Sherwood and Patrick Stevenson-Keating.

James Christian is questioning current British housing design by reintroducing failed models of the past in contemporary building lots. His drawings show a pastel alternative present. Ilona Gaynor‘s interest lies in the relationships between the judiciary system and “The Society of the Spectacle“, how they open up opportunities for staged / illegal events. Torsten Sherwood create a new kind of construction toy. 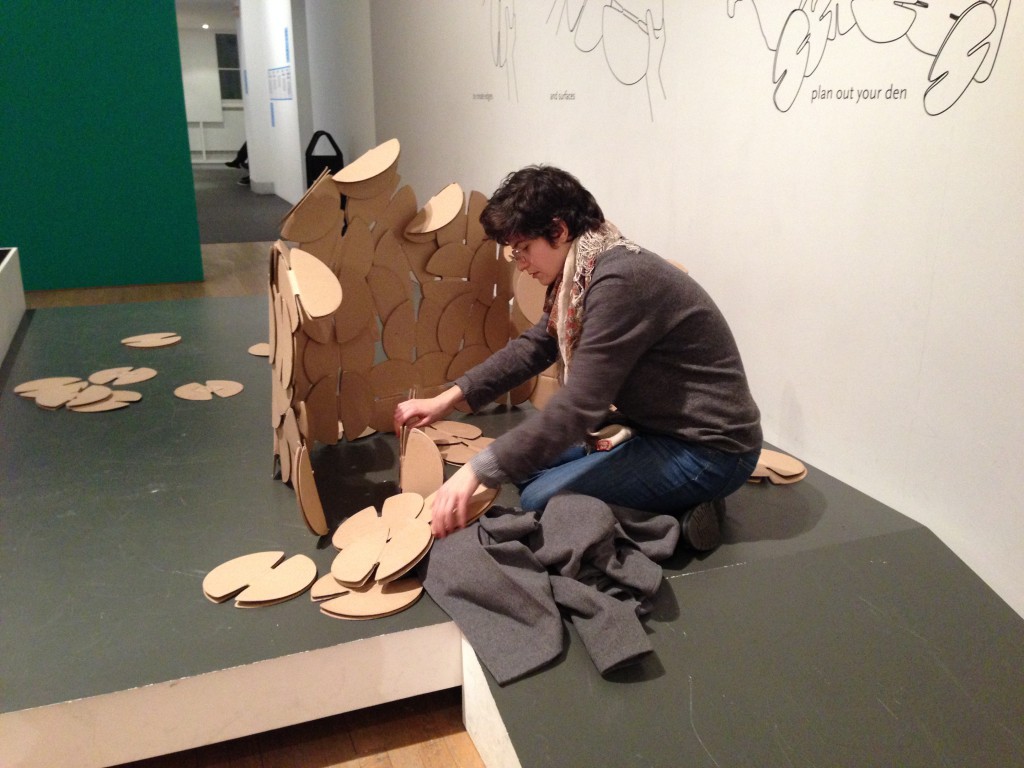 (Emeline thoroughly tested its possibilities)
Patrick Stevenson-Keating designs new financial products, therefore underlining the role we agree to play in the global banking and economical system. His propositions imagine a world where a slightly different system would aim at “social good.” 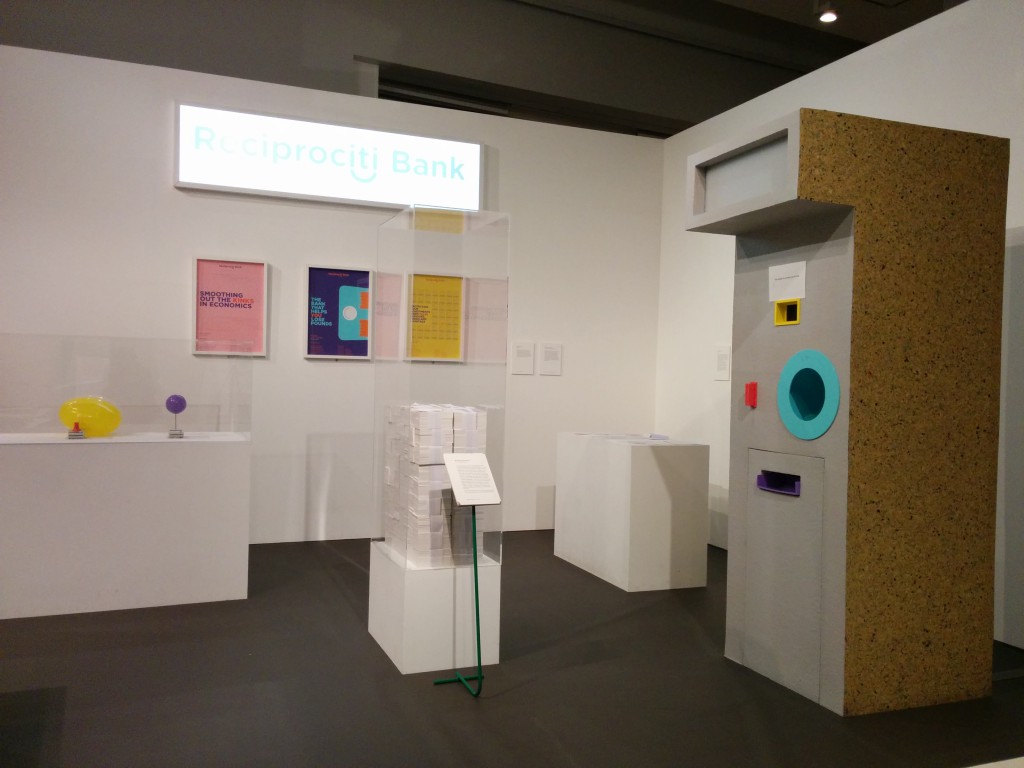 We were surprised that none of the designers had chosen to disrupt “the museum itself”. Those objects could have been designed outside of this context and placed there. The process of design itself, the context of their production, tend to disappear in the exhibition.

Ambiguity is lying in this “unspoken” of the assignment, in the unclear status of those apparatus. Those objects are reflecting a reality that could be but is not, could get out of the museum but also seem hard to be moved. The ambiguous might be the Design Museum itself.
More

Website presentation:
“From Suffragette teapots to protest robots, this exhibition was the first to examine the powerful role of objects in movements for social change. It demonstrated how political activism drives a wealth of design ingenuity and collective creativity that defy standard definitions of art and design.”

Considering this statement, here is a question:
What is “democratic aesthetics”? 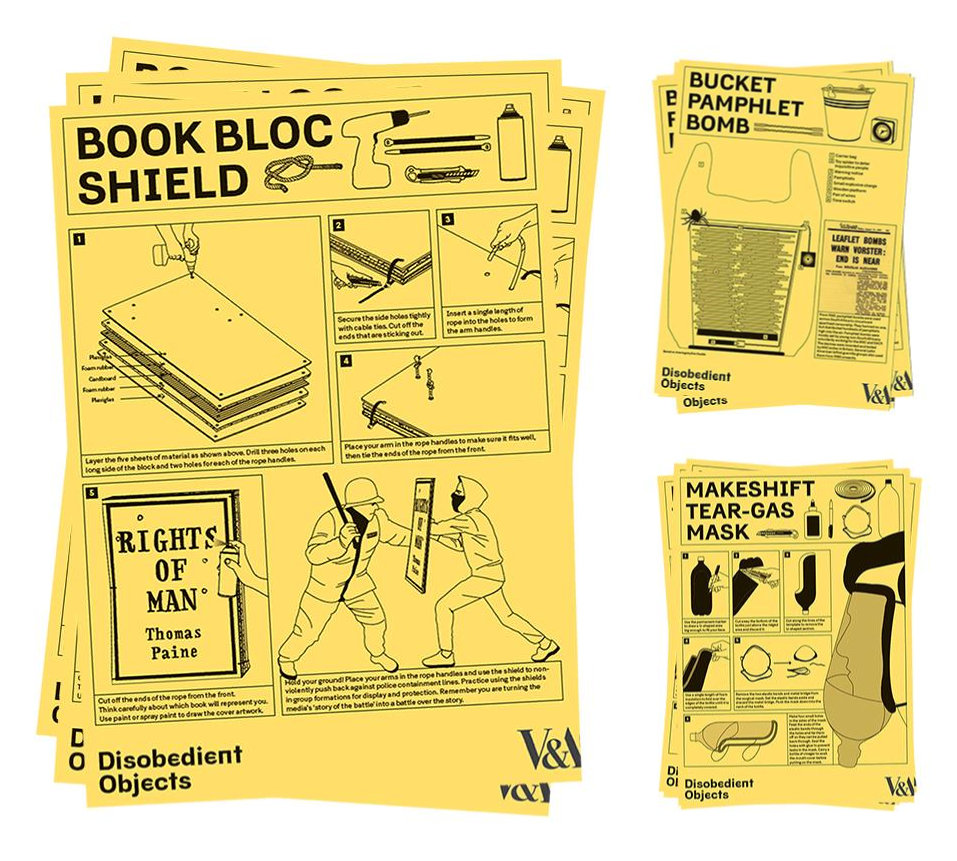 The exhibition Disobedient Objects, commissioned by Catherine Flood and Gavin Grindon, brings together a selection of artifacts produced by and for situations of political and social protest. Gleaned over the world, mostly provided by the activist movements themselves, the gathered artifacts embody a praxis of contestation.

Finally, artifacts as markers of disobedience more than « disobedient objects ».

To the temporal, geographical, cultural, formal, scalar heterogeneity opposes a familiar look, which is, according to the curators, originated in common crafting practices:  « mostly produced by non-professional makers, and with collectively limited resources as effective responses to complex situations. ».

This formal proximity, however, doesn’t solely reside in the use and implementation of certain techniques (hijacking, DIY or reappropriation) and some materials (paper, cardboard, construction materials, textiles, scrap, etc.) but it is the visible expression of (re)setting technical and symbolic potentialities of certain shapes, materials and objects.

In other words, if there are only a few obvious formal relationships between handmade chilean embroideries, video games by La Molle Industria or Irish and British coins minted with loyalist or separatist signs, yet these artifacts all originate from the  same familiar, tamed, domesticated relationship a maker develops with her/his know-hows. In the words of Thomas Hirschhorn, Swiss artist claiming to “make art politically », here activists use materials that don’t intimidate them.

Something in these artifacts may fall in a certain « poverty », primarily within the meaning retained by Andrea Branzi when proposing the concept of « poor technique (tecnica povera) »: « it is unnecessary to spend a number of years in vocational training and university to make a piece of wood stand up. »
Furthermore, some form of expenditure paradoxically rises, as opposed to « economy », according to Pierre-Damien Huyghe after Georges Bataille. Here technique and skills are not « economised », that is to say kept or spared: on the contrary, the events themselves are fueled by expenditure. If « economy economises », set aside the potentialities then expenditure releases them: freed, the potential of spray paint, of cardboard, of sewing and metallurgy, of robotics and computer science, of visual communication and advertising, etc.. The guiding principle of these objects is heard in the words of Thomas Hirschhorn: «Energy Yes! Quality No!». A principle of intensification that occurs in the event rather than a principle of fixation that takes shape.

Their principle is that of a “Becoming”, here know-hows are engaged in the act of “Becoming Disobedient”; dynamic, it might be a component of what Deleuze and Guattari have defined as the “War Machine“, eventually intensified, reterritorialized in such technical and symbolic resistance, and in the relations of forces with the knowledge and powers.

What “takes shape” in these disobedient objects is precisely a potentiality (of the techniques, of the forms, of the materials) achieved through know-hows in resistance: experimental know-hows, “re-conditioned” know-hows, to use the terminology of Just Peciulyte and Frédéric Valentin.

It is always tricky to think with key-words, to use the concept of Balibar, and “democracy” is one of them.
However, assuming democracy as disagreement, as dispute (Rancière 1995), a democratic aesthetics may be manifesting in these objects. When a delivery box becomes a shield, when a water bottle becomes a gas mask, when a bicycle frame becomes a moving barricade, then there is a dispute over the economy of production, the economy of meaning, the economy of potency.
To quote Rancière, “politics exists when the natural order of domination is interrupted by the institution of a supernumerary part: the demos“. One might say that these objects are a demos of objects as they are bringing out the “supernumerary” of techniques, of power (understood here as “realised potency”), of knowledge.